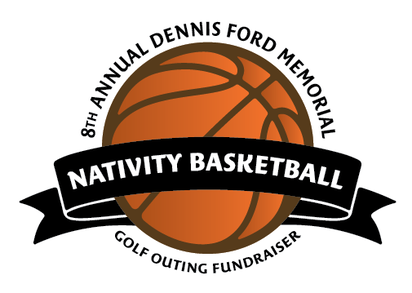 Thank you to our 2022-23 Basketball season sponsors!

Generous, humorous, determined, motivational, boisterous, loving— just a few words that family and friends use to describe Dennis Ford! The Nativity of the Virgin Mary was blessed to have Dennis as a member of its parish, and now his legacy lives on, particularly within Nativity’s basketball program. Dennis had a passion for sports and loved golf. In fact, he played football and wrestled at Wayne State where he majored in accounting. When Dennis was elected to Nativity’s Parish Council, he recognized the need to fund the youth programs within the church further. He approached Nondo Basoukeas, Nativity Basketball Program Director, to discuss the basketball program and quickly realized that although the bake sales were great, much more would need to be done to help fund this ministry for the youth.

Dennis proposed a golf outing fundraiser. He had experience organizing an annual golf outing for his employer, so he knew how to plan a successful fundraising event to benefit Nativity basketball. In 2014, with Dennis’ leadership and commitment to the basketball ministry, Nativity hosted its’ first golf outing. The support for the golf outing grew every year, and Dennis was thrilled to see interest in Nativity basketball grow as well. From 2014 until 2018, he was instrumental in gathering golfers for the Nativity golf outing as well as securing hole sponsorships to benefit the program. In 2017, Dennis even planned a fundraiser event with the Greek comedian Basil to raise money.

In addition to fundraising, Dennis helped set up a basketball clinic with John Long, a former Detroit Pistons Player, at one of the basketball practices. Kids loved it!!!

Dennis’ legacy story would not be complete without mentioning his generous donation of basketballs! In 2016, Dennis showed up at one of the practices, recognizing that there were not enough basketballs for the players and the balls that were there had excessive wear and tear, barely bouncing. The following week, Dennis asked Nondo to meet him at the church. As Nondo describes, Dennis pulled up in his purple Chrysler PT Cruiser loaded with 35-40 of the highest quality, brand-new basketballs and said, “Nondo, I went to Dicks Sporting Goods, and they gave me a good deal on basketballs. So, I bought them for the team”.  When Nondo asked how much was owed, Dennis adamantly declared, “This is my gift to the church!” As Nondo warmly recalls, “Dennis always wanted to help and never asked for anything in return. A true Christian!”  The kids continue to use these same balls today!

The Nativity Greek Orthodox Church proudly honors Dennis’ contributions to the basketball program, having named the annual Nativity golf outing in his name- “Annual Dennis Ford Memorial Golf Outing Fundraiser”! Since Dennis’ passing in 2019, friends and family continue to gather at the annual Nativity Golf Outing Fundraiser to not only benefit the program but to honor the man who was so kind and generous to those around him.